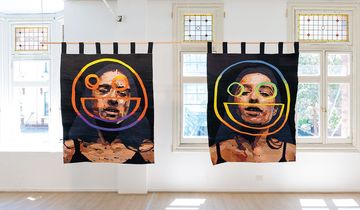 Abdul Abdullah is an Australian Malay artist whose provocative figurative portraits confront the politicisation of his identity and address the experience of being 'Other'.

Abdullah was born in Perth, Australia to a Malay mother and an Anglo-Australian father, whose ancestors arrived in the country on a convict ship 200 years ago.

Abdullah's brother is the sculptor and installation artist Abdul-Rahman. Both siblings attended Curtin University in Perth, where Abdullah graduated in 2008. The artist then completed an MFA at UNSW Art and Design, Sydney in 2017.

As a Muslim artist with Malaysian, Indonesian, and Australian heritage, Abdul Abdullah's work draws from the complexities in his own identity to address the tension between the perception of identity and the reality of lived experience.

As a child, Abdullah was deeply impacted by the terrorist attacks of 11 September 2001, an influence that has carried over into his works today. Among the artist's recollections is the memory of a man tearing the hijab off his mother's head.

In 2015 joint exhibition with his brother Abdul-Rahman, Abdullah showed the vastly misunderstood Entertainers (2013), a portrait of a figure wearing a balaclava with eyes and mouth assembled from the features of Beyoncé, Kayne West, and Madonna.

While the collage was meant to convey the artist's experience growing up Muslim, The West Australian newspaper accused the artist of promoting terrorism.

Abdullah's 2017 exhibition Terms of Engagement: Examining the Rhetoric of Radicalisation at UNSW Galleries showed portraits of young Muslim people engaged in criminal activity, reflecting stereotypes popularly associated with Muslim people. Amongst them, Bride 1 (Victoria) (2015) and Groom 1 (Zofloya) (2015) depict side-by-side portraits of a woman and a man dressed in white, heads covered in balaclavas.

Equally provocative images like All let us rejoice and For we are young and free (both 2017), which depict portraits of Australian soldiers overlaid with smiley faces, were met with censure from local government members, who demanded the works be removed from the gallery.

Abdullah's satirical portraits were followed by thick line drawing series like 'What's mine is yours' (2020), in which figures are strangled or held in a headlock against serene waters and orange cloudscapes.

The same year, Abdullah participated in 52 ACTIONS at Artspace in Sydney, for which he exhibited photographs of his text-based tattoos alongside short passages describing how each serve as a reminder of his political principles.

In a 2017 conversation with Ocula Magazine, the artist expresses the importance of having a 'generous' art practice with a variety of 'access points—whether they are aesthetic, conceptual, historical or political' to create different ways for audiences to enter the conversation.

Abdullah is the recipient of the Victoria Park Art Award and First Prize in the Linden Postcard Show, both 2014.

Abdullah was also a shortlisted nominee for the Australian Pavilion at the 2018 Venice Biennale as well as a finalist for the 2018 Sulman Prize; the Archibald Prize; the 2015 Sovereign Art Prize, Hong Kong; the 2014 John Fries Award; the 2013 Blake Prize; and the 2012 Black Swan Prize for Portraiture.

Abdul Abdullah has been the subject of both solo and group exhibitions.

View All (7)
Ocula Photolog Sydney Contemporary 2022: In Photos Australian art fair Sydney Contemporary returns to Carriageworks from 8–11 September. Ocula's Hazel Ellis was on the ground to capture all the art, the energy, and the atmosphere on the fair's opening day.

View More Ocula News Taipei Dangdai 2022: Booth Previews From Five Gallery Directors Taipei, 17 May 2022 The fair will feature 62 galleries when it returns to the Taipei World Trade Center from 19 to 22 May 2022. We asked directors at Yavuz, Lin & Lin, Whitestone, Asia Art Center, and Hanart TZ to share what they're showing and why.

Read More Ocula Feature Sydney Contemporary: Bridging the Gap By Anna Dickie, Sydney Over 80 galleries participated in the fair's fourth edition—its second annual staging, following the fair's decision to up the ante after initially launching the event biannually in 2013.