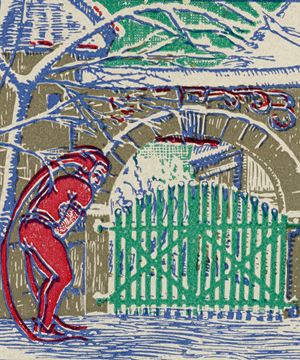 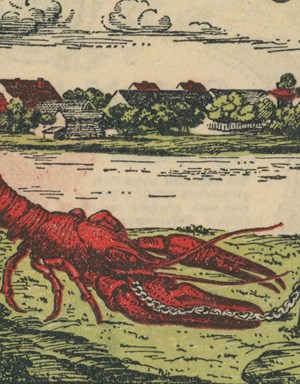 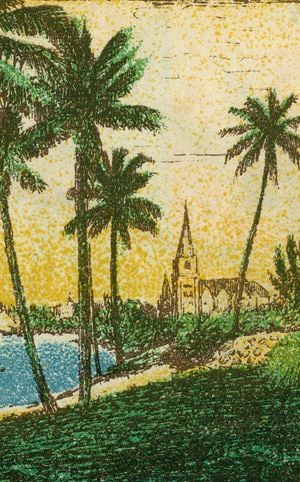 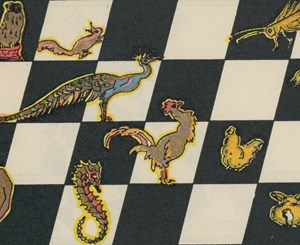 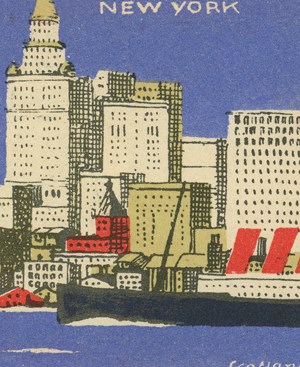 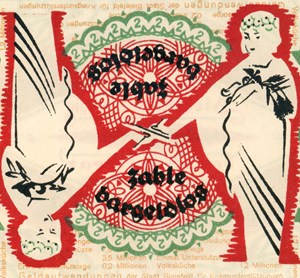 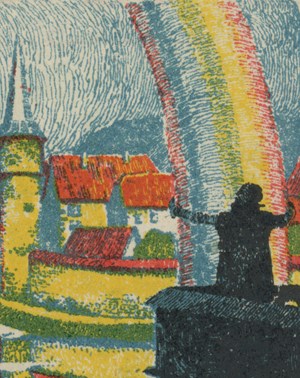 The first question this exhibition raises refers to the currency known as Notgeld. The prints, which constitute the greater part of the show, are scanned fragments of this found material. Consequently, the second question to address is how an exhibition of this character should be regarded within the framework of contemporary art, as the historical and political weight of Notgeld can very well take centre-stage and eclipse the artistic, rather than documentary, intentions behind it.

Throughout history, Notgeld has been understood as a currency issued by non-governmental entities such as towns, cities and municipalities, in times of crisis. The banknotes, which this exhibition revolve around previously functioned as an alternative to Reichsbank currency during Germany’s inflation period (1914–1923). The notes were highly pervasive in everyday life, and displayed over 100,000 different graphic designs by regional artists. Despite this visibility and the fact that it was created by artists, Notgeld has been ignored as an art form within the history of art. It was presumably deemed too caricaturesque to enter the ranks of 'serious' or 'high' art, traditionally unconcerned with such 'low' and 'minor' uses of aesthetics. The völkisch themes and traditional techniques of many of the motifs clearly contrast with the coetaneous avant-garde movements that represent the 1910s–1920s in art-historical records and this narrative contradiction is the apparent cause of their absence in art historical discourse. What is more, the omission of Notgeld further extends to the field of economy history, where it is only mentioned as a meagre footnote in the analysis of the inflation during the Weimar Republic. Nevertheless, since these banknotes were eagerly collected at the time, due to their craftsmanship, many instances of the currency have survived in private archives and are sold as curiosities for a humble price at coin shops, online stores, as well as auctions.

Julian Irlinger’s project on Notgeld is consistent with the line of work that he has been pursuing in recent years. Irlinger has long since been an avid collector of objects and materials ranging from timber beams, to digital renderings, to entire series of comics books he has never read. Though his active collecting has always been more recreational, his artistic projects are often derived from his collected objects. His work as an artist begins when he delves into one collection and starts to observe salient patterns, particular commonalities that allow him to categorise an otherwise heterogeneous gathering of unexamined materials. This taxonomical analysis follows an impulse to bring to light significant nuances among the elements which are generally overlooked by force of habit or obscured by some established historical interpretation. For instance, over the last two years, he has worked around collections of digital representations of museums, which were produced by Google and by the institutions themselves. He then developed lenticular prints that were arranged with architectural elements to address the notion of spectatorship in relation to image-property in the realm of the art economy.

The concrete groupings of images that Irlinger lays out in his Notgeld works, suggest an implicit order that the artist leaves up to the viewer to interpret. Themes include depictions of colonial politics, idealised German landscapes, sardonic social commentary on the country’s poverty following World War I, as well as the Treaty of Versailles. The current state of affairs in German politics is often characterised by increased social segregation and radical right-wing discourse. In the context, Irlinger’s re-examination of found materials, depicting scenes of social upheaval and myths of German identity, can be interpreted as an attempt to approach the political unconscious embodied in this concrete cultural artefact. What constitutes the ideology imbued in these motifs? How does this worldview permeate the current German socio-political landscape?

Though Irlinger’s re-staging of historical materials could be initially situated within the framework of archival artwork of the early 2000s, these works belong to a sensitivity that has clearly integrated the new status quo brought about by the digital era. The Notgeld itself is never present in the exhibition, but rather as digital prints of previously scanned banknote fragments. This set the logic of this archive within a digital sphere, rather than the concrete reality of the physical object. This logic is then juxtaposed with two Papiermark kites, which give a nod to the children of post-WWI Germany, who played with kites made from discarded banknotes, as appears on a historical photograph of the time that belongs to Irlinger’s private collection. The kites made by the children with worthless inflation banknotes is, paradoxically, the perfect embodiment of the virtuality of money.

Sign up to be among the first to know when new exhibitions by Julian Irlinger or at Galerie Thomas Schulte open.