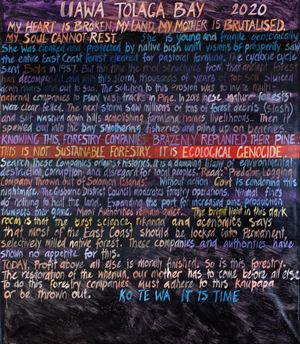 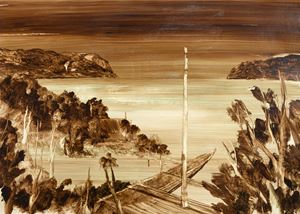 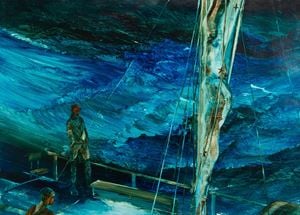 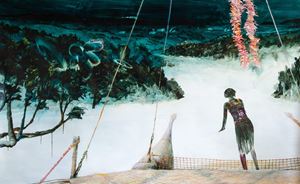 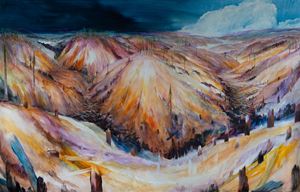 John Walsh (Aitanga a Hauiti/ New Zealand Irish) grew up in Uawa. This exhibition is an impassioned plea to the forestry companies involved to look at their practices and the damage they are causing both to the environment and the people of Uawa, and a desperate appeal to government and local council to examine legislation.

The large unstretched canvas When decisions are made from afar depicts the scale of the destruction: a fleshy toned landscape of rolling hills stripped bare; strewn with great piles of felled timber and forestry debris that will eventually wash downstream gouging soil and habitats of whitebait, eels, and birds; and then out to sea smothering fisheries, before rolling back in on the tide to litter the beaches.

Alongside this work, another canvas is a mass of carefully hand-painted text, each word variously coloured and capitalised against a heavily textured dark background. Written in the artist's own words and hand, My Heart is Broken contains Walsh's deeply personal ode to the maltreated whenua of Uawa.

"My heart is broken. My land, my mother is brutalised. My soul cannot rest. She is young and fragile geologically. She was cloaked and protected by native bush until visions of prosperity saw the entire East Coast forest cleared for pastoral farming. The Cyclone cycle sent Bola in 1987. But this time the root structures from that ancient forest had decomposed and with that storm, thousands of years of top soil sluiced down rivers and out to sea. The solution to this erosion was to invite multi-national companies to plant vast tracts in pine. In 2018 these mature forests were clear felled. The next storm saw millions of tons of forest debris (slash) and silt wash down the hills demolishing farmland, homes, livelihoods... then it spewed out into the bay smothering fisheries and piling up on beaches. Knowing this, Forestry Companies have brazenly replanted their pine. This is not sustainable forestry. This is ecological genocide and cannot be justified. Search these companies' origins and histories. It is a damning litany of environmental destruction, corruption and disregard for local peoples. Read: "Predator Logging Company Thrown out of Solomon Islands." Without action Govt is condoning this nightmare. The Gisborne District Council moderates these forestry operations. Minimal fines imposed on Forestry Companies does nothing to heal the land. Expanding the port for increased Pine production trumpets their game. Maori authorities remain quiet. The bright light in this dark room is that the best science, tikanga and economics says that much of the East Coast should be locked into permanent, selectively milled native forest. These companies and authorities have shown no appetite for this. Today, profit above all else is morally finished. So is this forestry. Restoration of the whenua, our mother has to come before all else. To do this forestry companies must adhere to this kaupapa or be thrown out. Ko te wa. It is time.

Sign up to be among the first to know when new exhibitions by John Walsh or at Page Galleries open.