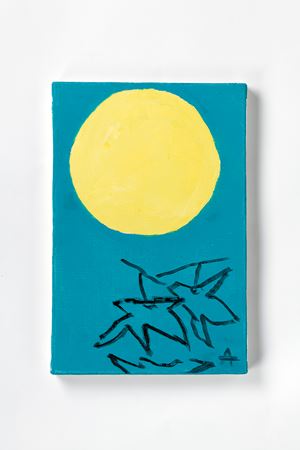 Etel Adnan has always been interested in cosmology, the relationship of planets and stars with each other, but above all their interaction with Earth. Her first poem, written when she was still living in Lebanon, evoked the link between the sun and the sea. In the 1960s, in California, she was fascinated by space exploration. When Gagarin died, she wrote A Funeral March for The First Cosmonaut and the publishing house founded by her friend Simone Fattal was named The Post-Apollo Press, in tribute to the Apollo missions organised by NASA.

For her retrospective at the Serpentine Gallery in London in 2016, she wanted to include new paintings: these were the first twenty in 'The Weight of the World' series, and they delighted visitors. One was chosen to feature on the cover of the catalogue. In 2017 this was followed by 'The Weight of the Moon'. All of these paintings present colourful circles of varying sizes, with a disarming simplicity, balance and taste: how can so much pleasure be created by so little? Etel Adnan knows the secret. Since Autumn 2019, a new series has emerged, entitled 'Planets'. This time, the relationship between the Earth and its star is highlighted by the presence under the circular mass of a familiar element: a tree, a boat, a ladder, a bicycle. These vibrant paintings manifest the delight with the cosmic and the quotidian, the tangible and the infinite which is the source both of the pictorial and the poetic art of Etel Adnan.

Etel Adnan was born in Beirut in 1925. After spending much of her life in San Francisco, she moved to Paris. Her work acquired an international reputation following its presentation at the Documenta in Kassel in 2012. In recent years, there have been many exhibitions of her work in the leading museums of Middle East Europe and the United States.

Sign up to be among the first to know when new exhibitions by Etel Adnan or at Galerie Lelong & Co. Paris open.