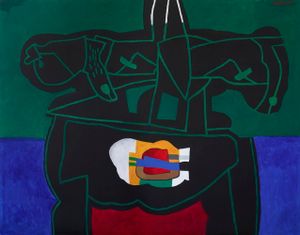 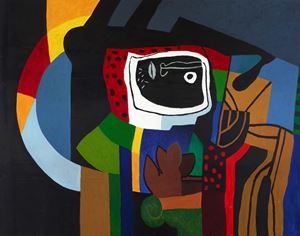 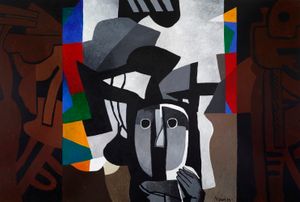 Painted in Dia al-Azzawi's recently established studio in Lebanon, set back from the water in a shady grove just next to Nabu Museum, which was opened in October 2018, these recent paintings exude a fresh vibrancy that may have sprung from the change of scenery, especially the change between London and the tranquil, picturesque northern Lebanese coastal town of Chekka, close to the city of Batroun.

Azzawi as an artist has never been restricted in his exploration of time, space or creative imagination. While he may often use a distinct range of colours and some typical cultural motifs and artistic techniques, the worlds he creates within his canvases truly knows no bounds.

Regarded as one of Iraq's greatest painters, Dia al-Azzawi started his artistic career in 1964, after graduating from the Institute of Fine Arts in Baghdad and completing a degree in archaeology from Baghdad University in 1962. In 1969, Azzawi (with Rafa Nasiri, Mohammad Muhriddin, Ismail Fattah, Hachem al-Samarchi and Saleh al-Jumaie) formed the New Vision group (al-Ru'yya al-Jadidah), uniting fellow artists ideologically and culturally as opposed to stylistically. Through his involvement with the New Vision group Azzawi found inspiration in contemporary subjects and issues, particularly the plight of Palestinians. He was also briefly a member of Shakir Hassan Al Said's One Dimension group (Jama't al-Bu'd al-Wahid). From 1968–1976, Azzawi was the director of the Iraqi Antiquities Department in Baghdad. He has lived in London since 1976, where he served as art advisor to the city's Iraqi Cultural Centre, from 1977–1980. Azzawi's move to London led him to rediscover book art (dafater), an art form that he has encouraged other artists from Iraq and the region to explore. As well as his painting practice, Azzawi also works in sculpture, tapestry and printmaking.

The Lebanon Works exhibition will run at Meem Gallery from 23 March until 24 June 2021.

Sign up to be among the first to know when new exhibitions by Dia Al-Azzawi or at Meem Gallery open.