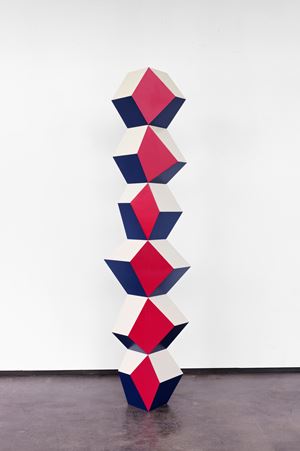 Simon Lee Gallery is pleased to present a solo exhibition by British Canadian artist Angela Bulloch at the New York space, for the very first time. The show is comprised of new Night Sky works, prints, sculptures and wall paintings. The Night Sky works are made from three dimensional maps of the universe, giving us views of well known constellations from ordinarily unreachable positions. The mathematical systems so often at the heart of the artist’s work, suggest that all is not as it seems. Alongside these works, the exhibition will include two sculptures, Heavy Metal Stack of Six: How Now?, a stack of six modular forms in polychrome steel that rise above the human form, pictured above, and Union Stack, a smaller indoor sculpture.

theanyspacewhatever (2008) at the Solomon R. Guggenheim New York presented Firmamental Night Sky: Oculus.12 (2008), an architectural intervention which opened to a constant view of a spectacular Night Sky, suspended within the famous Frank Lloyd Wright rotunda. The arrangement of the points of light in each panel of a Night Sky, with pulsing stars and winking far away worlds, recreates a particular view of a planet or a constellation taken from a viewpoint deep into the universe, far from Earth. Night Skies re-imagine the familiar patterns of the stars which we see from earth, and in this reimagining, suggest our own ability to shift from the real to the virtual realm, to experience that which we can never really see.

The totemic form of the outdoor sculpture, Heavy Metal Stack of Six: How Now?, which will be installed on the gallery terrace, suggests a similar oscillation between virtual and real space, from a digital origin, inside a 3D drawing application, to an analogue materiality. The colours of its facets create an illusionistic flatness which transports the viewer back into a virtual space. As in the Night Sky works, the generation of forms, from a digital geometric origin, creates a sense of displacement, a sense that the physical materiality of the work is a product of a geometric concept and could at any point evaporate back into the notional world of the artist’s imagination.

“…then nothing turned itself inside-out and became something” Sign up to be among the first to know when new exhibitions by Angela Bulloch or at Simon Lee Gallery open.