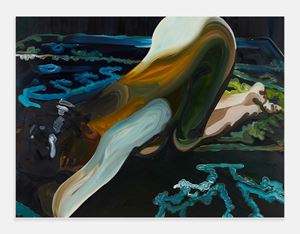 Simon Lee Gallery, New York, is pleased to announce a group exhibition featuring new works by Mira Dancy, France-Lise McGurn, and Clare Woods. Connected through an interest in figurative representation, the exhibition brings together three artists who present the body in unconventional ways, each exploring contemporary issues surrounding gender, sexuality, society and politics, as well as addressing the long and problematic history of the male gaze. The submissive female subject typically depicted reclining, seated or kneeling, is one of the most recognisable motifs in art history. As seen in this exhibition, Dancy, McGurn, and Woods respond to this convention through disparate methods presenting the figure as alternatively dominant, vulnerable, playful, or even androgynous, restoring to their subjects a sense of agency and recontextualising the trope for our contemporary moment.

UK-based artist Clare Woods destabilises the canonical notion of an idealised model. Since Woods's pivot from landscape painting in 2011, her practice has become increasingly concerned with the human form, drawing from a wide array of source material: the art historical canon, media images and medical textbooks, among others. Her use of figuration stems from a preoccupation with the fallible quality of the body—its inclination toward weakness, illness, even death. A sense of alienation from the corporeal form pervades her work, as does a particular form of estrangement, emphasised by her use of brightly coloured abstraction and compositional distortions.

If Woods's works are rooted in source imagery and the realities of the body, Glaswegian artist France-Lise McGurn's works feature figures that spring from the artist's imagination. McGurn eschews gender binaries and solitary subjects in favour of layered compositions brimming with the elegant contours of bodily forms: limbs, faces, and other sly suggestions of anatomy. Archetypal figures, often portrayed in a state of undress, whether in groups, in pairs or alone, recline in both ecstasy and agony, while collectively these languid figures invoke a sense of social belonging. Employing ecstatic brushwork and bright, bold colours, these works posit the model foremost as a desiring body—active, even if at rest. Fragmented, morphed, merged and remade, the bodies depicted by these artists push the notion of what figurative painting can be, expanding and destabilising fixed ideas of identity and representation.

3 new artworks have recently been added by Simon Lee Gallery.
Sign up now to be among the first to know when new artworks are added.
Sign Up