Fast forward seven years, and ArtDrunk has grown into a global digital platform, offering it's loyal followers all their art world need-to-knows; through city guides, weekly newsletters, YouTube interviews, and continuous stream of eye-catching Instagram content to their 100k+ followers.

With the art-world having flocked to Seoul last week for Frieze's debut in Asia, ArtDrunk's 'Seoul Art Guide' would have been a bible for many, meticulously navigating them around the best exhibitions, food and bars in the city.

In this interview, Yeh shares why he looked to Seoul as an outpost for ArtDrunk, and how the South Korean capital provides a unique and exciting environment for the artist and gallerists emerging in the city.

What made you choose Seoul as an outpost for ArtDrunk? Did you have experience with the city's art scene beforehand?

It was actually pretty serendipitous. I first started coming to Seoul in 2019. Right after Art Basel Hong Kong, I happened to go to Tokyo and had three or four days to just do something different. And Seoul is just on the wayside, so I came on a whim.

At that time, I didn't have much exposure beyond maybe one or two artists. Tina Kim Gallery in New York had an exhibition of the artist Ha Chong-Hyun in 2018. And so when I came to Korea, I had the opportunity to visit his studio. That kind of introduced me right away to Kukje Gallery, and I learned about their programme and a bit about the art scene through them and how much was going on here.

Over time I have gotten to know more, having spent so much time here during the pandemic. For me it was very natural that we selected Seoul as our first foundation for ArtDrunk in Asia.

What do you love about the city?

It's funny, because I'm actually Taiwanese American. But I grew up in the suburbs of Washington, D.C., and there's a huge Korean American population there. So I was very familiar with Korean grocery stores, going to Korean barbecue restaurants, tofu houses—all these things. My mom watches K-dramas all the time. So as soon as I came to Korea, there was this really strange comfort for me. I don't speak the language, but it's pretty easy to get around. I was like, wow, this almost feels like home, because I'm so familiar with the food, and people are welcoming. I think the first time I came here, that really made a big impact on why I wanted to keep coming back so much the past few years.

You've made a number of visits to artist studios in Korea. Could you tell us a little about your experiences getting to know these artists and working with them?

The main exposure I had to artists' studios, before coming to Korea so regularly, were artist studios in New York City and London. And all of the spaces I'd been to were the typical closet-sized spaces, but great artists, great works.

Ha Chong-Hyun was the first artist I ever visited in Seoul. Very shortly after that, I was able to visit several other of my favourite Korean master painters, like Park Seo-Bo and Chung Sang-Hwa. And most of them have massive, massive studios, or have hundreds of works tucked into warehouses that are next to their studio. That was such an eye-opening experience for me— such a different pace of life, compared to New York artists. They're just in such different parts of their career.

Lee Bae and Chung Sang-Hwa have studios that are a bit more rural—and also beautiful places to venture into. It's almost a meditative experience, even just getting to their studio. And once you're there, it really is so serene, and kind of makes you want to be an artist, or to live that life.

With artists removing themselves from Seoul and setting up studios in these more rural areas, did you notice artist communities had formed off the back of these, or is everyone a bit of a one-man show?

Yes—I mean, in general, both young and old, I think that is a common criticism here, that there isn't much of a community.

I think there are occasional silos, where one artist might have a really good artist friend. But I haven't really seen artist communities here in the same sense as in New York, or London or L.A., with artist communities developing very naturally and organically from the art schools.

There's still only a handful of art schools here, too, but for some reason, you don't see as many artists showing up in hoards to their friends' openings. It's not like, say, when you see artists who graduated from Yale MFA. One artist might take off, and they'll try to pull their peers into their gallery, or galleries of a similar calibre. But I don't really see that here.

Is there a thriving group of younger artists working in Seoul right now that you've noticed, coming up through the art schools?

Yeah, definitely. I usually find artists by starting with galleries that I like, and looking one by one through their programmes, but that presence wasn't there for me at the start.

Something that's moving in a positive direction is that there are more younger galleries opening—but it's still very, very few. And one thing I also hear a lot from artists here is that they don't feel the support from local galleries. A lot of the new guys that open up are much more interested in the secondary market of master painters like Park Seo-Bo, or hot trendy artists from the West. I think it's very financially driven in that sense.

But we are starting to see great local galleries. ThisWeekendRoom is a gallery that I really like; P21 is another. I think those galleries have good taste and have been able to find artists that have great potential, both locally and internationally.

Yeah, it's one of the things I really loved about Korea—when I first came here it was part of a trip where I visited Hong Kong, Seoul, Tokyo, Taipei, and Singapore over a span of three weeks. And in that trip I saw the best balance of bringing in Western artists, while still actively exposing Korean artists to the international audience.

I found it hard to engage with Hong Kong's local artist scene—I just didn't feel it was easy to discover in the city. The more established and bigger international galleries just don't seem to exhibit or represent many Hong Kong artists. I hope this might change with the opening of M+.

Whereas in Korea, I really felt there was much more balance. There are big blue chip shows of Western artists, but they're also put in context with Korean masters, or Korean blue chip artists. And slowly we're starting to see more young and emerging artists in the mix.

Pace, for example, is doing a good job on that front—they recently expanded their ground floor space to feature more media and digital art. Recently, they had a show of Korean artists across multiple kinds of media – at the same time that Loie Hollowell was showing upstairs.

For collectors visiting Seoul for the first time, what would you recommend—both art related, and non-art related? Do you have a number of go-tos for first timers in the city?

Itaewon is an area where there are a lot of galleries, and it's just one of the hottest strips within Seoul, literally in the middle of the city. The Leeum Museum is one of the best places to start any art journey—it's also close to Pace, and Lehmann Maupin. The David Kordansky Gallery pop-up is near there as well.

One recommendation I have is Museum SAN, a few hours outside of Seoul. It's this museum tucked into the mountains. They have several James Turrell works, and it's just a beautifully designed space. They have a meditation room as well; it is an amazingly serene place to visit. It's quite refreshing to be able to get out of Seoul, even for an afternoon. 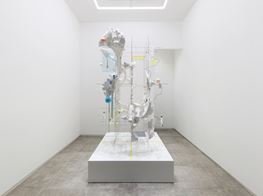