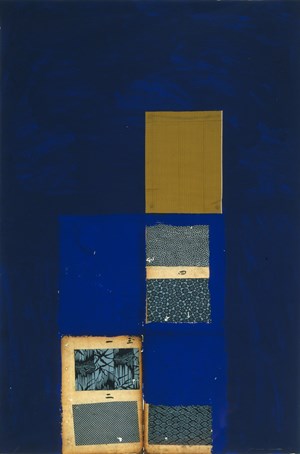 Galerie Lelong & Co. is exhibiting a series of works on paper: collages, monotypes, lithographs and paintings accompanied by a sculpture and enamelled lava by the American artist James Brown. Produced between 1986 and 1992, these works pay testimony to the artist’s 'Parisian years' and will be on display in the bookshop.

James Brown was born in Los Angeles in 1951 and now lives in Merida, Mexico. Already, in 1978, the Gemeentemuseum in Arnheim, The Netherlands, gave him his first institutional one-man show. Since then, his work has been exhibited in a number of important American and European museums. Recently, the contemporary art museum in Oaxaca and the Diego Rivera-Anaguacalli museum in Mexico paid tribute to him with the organisation of two major exhibitions. The work of James Brown also forms part of many public and private collections around the world. His work appears in MoMA, Whitney Museum and Metropolitan Museum of Art in New York, MNAM / Centre Pompidou in Paris, the Kolumba Museum in Cologne, as well as the centre for contemporary art in Malaga and the Tamayo Museum in Mexico City.

Sign up to be among the first to know when new exhibitions by James Brown or at Galerie Lelong & Co. Paris open.