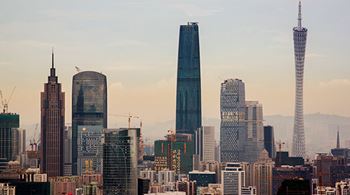 Guangzhou, the capital of China's southern Guangdong Province, is perhaps best known for its triennial, but it's also home to some of the country's leading institutions and art spaces, many of which occupy unusual spaces.

Adapted from the Guangzhou Biennial by the Guangdong Museum of Art in 2002, the Guangzhou Triennial is one of the most longstanding events of its kind in China. Its sixth edition in 2018 drew 49 artists from 12 countries. Building on that success, the Airport Biennale was added to the city's art calendar in 2019. The event takes place not at Guangzhou Baiyun International Airport but the nearby village of Fenghe, now renamed "Guangzhou Wings — Airport Cultural Town".

Also in the north of the city, on the way to the airport, is the Guangdong Times Museum, which is affixed to the upper floors of an apartment compound thanks to a novel design by OMA architects Rem Koolhaas and Alain Fouraux. Since opening in 2010, the museum has proven to be one of China's most ambitious, showing leading artists such as Pipilotti Rist, Adel Abdessemed and Jiang Zhi while striving to engage its local community through a strong events and education programme. Alongside the museum is Huangbian (HB) Station, a storefront space for studying contemporary art the Guangdong Times Museum established to accommodate teachers Huang Xiaopeng and Xu Tan after they were dismissed from the Guangzhou Academy of Fine Arts.

The Guangzhou Academy of Fine Arts has its own art museum too, but more engaging institutions in the city include the non-profit Fei Gallery, the stack of old railway containers that comprises the 53 Art Museum, and the YouYou Contemporary Art Centre (YYAC), which shows mostly new media works in a former Communist meeting hall. YYAC is located in the popular Xiaozhou artists village, a converted industrial site in the southeast of the city. Previously a cannery, Redtory Art & Design Factory is likewise a former industrial site, analogous to Beijing's 798 and Shanghai's M50, though significantly smaller.

The city's best commercial galleries include Canton Gallery, which was established in 2015 and focuses on artists based in the Pearl River Delta, Kuiyuan Gallery, which occupies an historic red-brick building built in 1922, and Bonacon Gallery, which was founded by the ubiquitous Chen Tong in 2016. Chen also founded the Libreria Borges Institute of Contemporary Art in 1997—a bookshop that professes to use literary methods for curating contemporary art by artists who have included Guangzhou-native Cao Fei—and co-founded Video Bureau, an archive of video art that spans Guangzhou and Beijing.

Other leading art spaces in the city include Vitamin Creative Space, founded in a run-down department store in 2002, Observation Society, established in a former hair salon in 2008, and Loft 345, a bar that has brought together artists, musicians, academia and other creatives and intellectuals since it was established in 2003 under the name Park19.

Past Exhibitions In Guangzhou