Opened in May 2021, UCCA Edge occupies 5,500 square meters over three levels of the new EDGE tower in Shanghai’s Jing’an District. Designed by New York-based architecture practice SO – IL, the museum includes 1,700 square meters of gallery space as well as a wraparound outdoor terrace and public spaces including a lobby and auditorium. As an integral part of the UCCA constellation, UCCA Edge will mount exhibitions of leading Chinese and international artists, some developed exclusively for the Shanghai audience, some touring from other UCCA locations.

In 2021, UCCA Edge will feature an opening show reflecting on the globalization of the Chinese art world through the prism of Shanghai, curated by UCCA Director Philip Tinari, a solo show of new paintings and archival materials by renowned artist Liu Xiaodong, and an Andy Warhol retrospective presented in collaboration with The Andy Warhol Museum, Pittsburgh.

It will also host a bistrot, New Wave by Da Vittorio, developed by the Michelin-starred team of Da Vittorio Shanghai, as well as an outpost of UCCA Store. Situated just north of People’s Square and Suzhou Creek, and directly above the Qufu Lu station of the Shanghai Metro in a bustling revitalized neighborhood, UCCA Edge will quickly become an essential destination and an integral part of Shanghai’s vibrant cultural fabric. 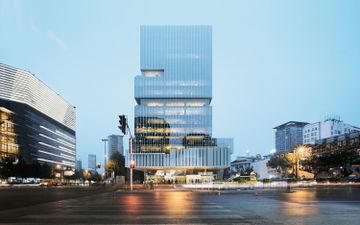 The event comes hot on the heels of Saudi Arabia's inaugural Diriyah Biennale, which opened in December 2021.